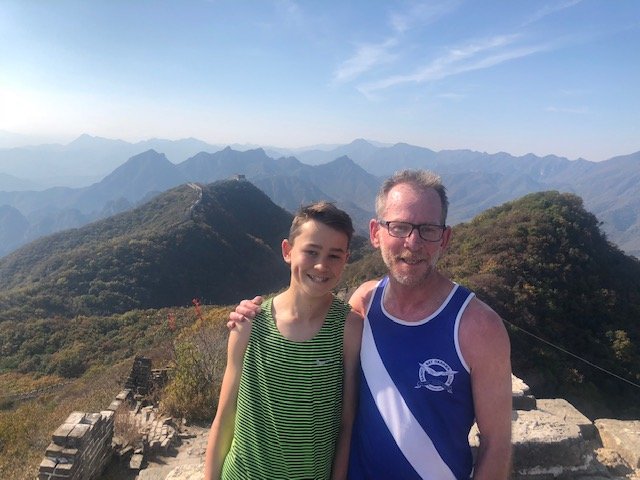 Meet Caleb Gardner a Professor at the Institute for Marine and Antarctic Studies, University of Tasmania (UTAS).

Q1. Tell us a bit about your work and family.

I work in fisheries science at IMAS, mainly providing information to help management of wild fisheries.  I’m increasingly involved in management of research teams and the organisation, and this side of my job was starting to ramp up around the time of my second child.  I have two kids, 9 and 14, and I took parental leave with my second who we were able to adopt in early 2010.

Q2. I understand you took paternity leave for your second child but not your first – how did taking leave impact on your career?

That’s right, I didn’t get much time off with my first but the rules had changed with my second so that men were able to take parental leave.  The change had been driven by another bloke who legally challenged being excluded from parental leave because he wanted to care for his adopted child.  Previously, the rationale was that parental leave should only apply to women because it was needed for breastfeeding but there’s obviously all sorts of different family situations.  Bonding requires special attention with adopted children so we wanted to be with my daughter every minute and avoid child care.

I don’t think taking parental leave had any effect on my career and was possibly positive.  This is because leave absences are taken into consideration for opportunities like study leave, ARC applications and promotion and that seemed to work OK for me.   The main issue for me with taking leave is that there were many tasks that I needed to try to juggle and maintain while on leave.  So I needed to keep busy when I could, when my daughter was asleep etc. and the parental leave was pretty hard going at times because of this.  It meant I was often exhausted and not as devoted a parent as I had aspired to be.

Q3. Similarly, how did taking a period of leave impact on your relationship or opportunities with your second child?

My first child wasn’t adopted so was more typical but probably a tougher experience because it was all new.  I wish I had been able to take more time off and especially for the first three months because that was hard going.  Later on I hated dropping him off to child care sometimes and wish I could have stayed with him more.  Second time around I knew what to expect and the parental leave was fantastic.  No question that this time together gave us great opportunity to bond – it was the best time and my daughter is amazing.  The parental leave provisions seem generous and I’m very grateful.

Q4. Has taking a career break to care for family or having growing children influenced the type of research you conduct or the work opportunities you explore? And if so, how?

My research outputs dipped while I was offline on parental leave but didn’t cease.  My graduate students and projects obviously couldn’t stop while I took leave so publications kept coming out.  I was obliged to keep contributing to these.  So outputs in areas that Unis typically measure kept flowing.  But there were larger administration and management tasks that needed to be passed off to others and were difficult to manage at the time. I don’t think the career break had any lasting effect though.

No question that having growing kids affects my work and opportunities now – it’s a trade-off I’m more than happy to make. The many small daily commitments like picking up from sport affects my daily work timetable and I’ve had many opportunities for interstate or international collaboration slip because it’s not always possible to be away from home.

Q5. What are the major challenges for fathers taking a career break from academia, and how do you think these challenges differ to those faced by women taking maternity leave?

Taking a career break is difficult for anyone in academia.  I was leading a bunch of projects with milestones and commitments that I was responsible for and couldn’t easily be shifted.  I muddled through by deferring where I could and trying to keep up by working at night.  It wasn’t ideal, but that would be equally challenging for men and women.  The physiological drain of becoming a biological mum looks phenomenally tough to me.   The first few months are probably easier for dads although in the case of adoption there’s often a lot of other issues.  My daughter was easy going but it’s not always that way.

Bonding between parent and child happens differently with everyone and I’m interested in the process because it’s such a big deal with adopted children.  My completely anecdotal impression of bonding from conversations with male and female friends is that bonding seems to take longer with men.  I’ve had quite a few conversations with men who have been relieved to hear it wasn’t just them who took a couple of months to really deeply bond with their new baby.  The point here is that I think encouraging men to spend more time with their children early on is important, healthy and it great that this is being discussed more.

It bugs me that parental leave and the impact of having a family on your career is so often described as an issue for women (“maternity leave”).  I know this isn’t a big deal and women probably encounter this sort of mildly irritating linguistic slight every five minutes but there you go.

Q6. The idea of paternity leave is increasingly discussed but these entitlements are still rarely used by fathers. What do you think we, as a community of academics, can do to make taking paternity leave more mainstream?

I get the impression that parental leave is seen as more discretionary for men and I suspect there’s more guilt with men about taking it.  I certainly felt guilty splashing around at the aquatic centre with my daughter on parental leave while my colleagues were struggling under the extra burden of my admin tasks…to the detriment of their own careers.   I felt compelled to come back a month early and worked while on still technically on parental leave.

The effect of taking parental leave on my career was always considered in any review of my performance.  But the effect of my displaced work on my colleagues didn’t get recognition in their promotion or performance reviews.

So on the question of what can be done to make parental leave for men more mainstream – I wonder whether we could better for the support crew behind every parental leave absence?  Would men be more willing and able to take parental leave if their colleagues received better recognition for taking on tasks displaced by parental leave?  Perhaps promotion should include a discussion on how staff have been team-players by being flexible and picking up extra tasks from colleagues for any reason such as resignation or extended parental/health/long service leave.  It’s these team players who are the champions of UTAS.

Language is also important.  Discussions about parental leave often assume the only people caring for babies are heterosexual women becoming mums by birth.